In her book, “A Sense of Wonder,” Rachel Carson pens the following engrossing narrative while describing nocturnal forays in search of singing insects with her adopted son Roger:

Most haunting of all is one I call the fairy bell ringer. I have never found him. I’m not sure I want to. His voice — and surely he himself — are so ethereal, so delicate, so otherworldly, that he should remain invisible, as he has through all the nights I have searched for him. It is exactly the sound that should come from a bell held in the hand of the tiniest elf, inexpressibly clear and silvery, so faint, so barely-to-be-heard that you hold your breath as you bend closer to the green glades from which the fairy chiming comes. 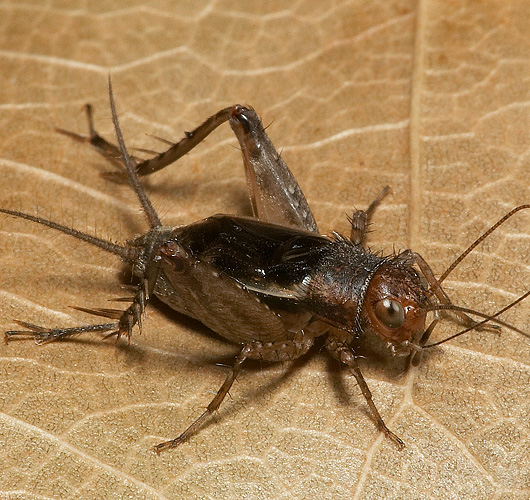 This quote has puzzled readers for a long time. Seemingly, the most apt identity of the singer she was seeking would be the Tinkling Ground Cricket, Allonemobius tinnulus. His song certainly fits the bill — a tiny bell being rung from the woodland floor. The silvery tinkling he produces can’t be heard from very far away as he prefers to hide in the leaf litter, preferable of oaks, as he rings out his chorus. Rachel was certainly not alone in having difficulty finding this diminutive singer. Once one is “certain” where he is singing from and begins to search within the layers of fallen leaves he seems to magically vanish. Other than the very lucky searcher who finds him perched on the surface, the best method to find him seems to be to lay out a light colored sheet, grab a large arm full of leaf litter from where he is singing and plop it on the sheet. Careful searching through the treasures in the mound will finally reveal this elusive songster — usually under the last leaf to be turned.

Tinkling Ground Crickets can be found from the southern portion of the New England States south to mid-Georgia, then south from the Gulf coast of Alabama to east Texas then north to extreme southeast Nebraska with a northern limit across northern Illinois, Indiana, Ohio, and then through New York.

Here is a recording of the silvery ringing of a Tinkling Ground Cricket on a cool and rainy day in West Virginia. It certainly evokes the image of a tiny fairy rhythmically swinging a tiny silver bell as if calling all the fairies within earshot to assemble.

What do you think of Rachel’s marvelous description? Have you heard this secretive singer in the woods near you? If not, next time you are in the woods, from late July until frosts silence these singers, listen for the silvery bell being rung from the forest floor both day and night. A careful approach with a flashlight might just reveal the singer perched on a clump of leaves — lord of his minute domain.