Song of a Hieroglyphic Cicada (scroll down for explanation and additional recordings!).

With a vibrant turquoise and black forebody set against a pale golden abdomen, the delicate Hieroglyphic Cicada looks as if it is from a different world. Less than an inch long, it is predominantly southeastern in distribution and is often found in loose colonies in dry woods of oak and pine. Males typically sing from high perches and are difficult to capture, but sometimes they breed in young stands, where it is possible to fnd them on the bark of small trees. An early-season singer, heard from June through July. 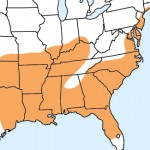 Song: A high-pitched dissonant drone given all day long that is reminiscent of the sound made by a model airplane. Songs typically last 15–20 seconds and are often given one after the other. Songs start soft but quickly build in volume. There are usually distinct pulsations of loudness at the beginning, before the song becomes smooth and then tapers off at the end: zeea-zeea-zeea-zeea-zeeeeeeeeeeeeee (some songs are mostly smooth throughout). There are two distinct peak frequencies; one at 5 kHz, the other at 10 kHz. 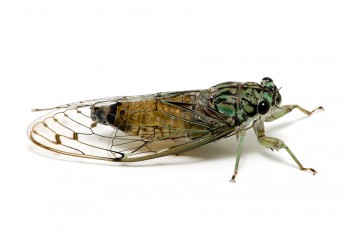