Song of a Slow-tinkling Trig (scroll down for explanation and additional recordings!). 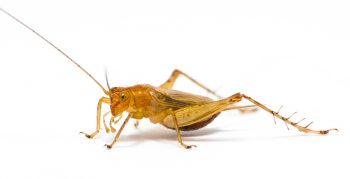 Similar in appearence to Say’s Trig, the Slow-tinkling Trig is found in the understory of open, deciduous woods and woodland margins in late summer and fall. They are typically found low to the gound, often not more than a meter high. They can be observed actively searching for food and mates after dark, but when approached, they are very quick to jump away making capture difficult.

The Slow-tinkling Trig, along with several other related species of trigs, was only recently described to science by Drs. TJ Walker and David H. Funk (see this PDF).

Slow-tinkling Trigs are found from New Jersey and southeastern Pennsylvania, south through Virginia and in most of North Carolina. Then south into the western portions of South Carolina, Georgia, and Florida. Then west to eastern Texas and north to southern Missouri. A colony of Slow-tinkling Trigs was found by this author in Jefferson County, West Virginia in August of 2018.

Song: A clear, silvery, steady series of chirps at about 6.5 kHz with a pulse rate of about 4 chirps per second. Males are usually well hidden in the vegetation while singing and may sound like they are singing from the ground. The song is pleasant and mesmerizing. Listening to a chorus of singing insects that includes the slow, steady beat of Slow-tinkling Trigs can be very soothing and relaxing. This species can be misidentified as a “cold” Tinkling Ground Cricket, but listen carefully for the slower pulse-rate of the trig.

You can either change xenical without exercise the situation or change your reaction..

Audio spectrogram of the song of Slow-tinkling Trig. Notice that there are 4 chirps/sec (21℃).