Song of a Carolina Grasshopper (scroll down for explanation and additional recordings!). 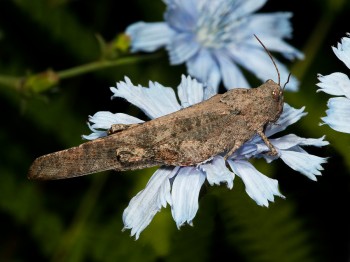 Common throughout the East, the Carolina and Boll’s Grasshoppers, along with most other band-winged grasshoppers, inhabit dry areas. The Carolina Grasshopper prefers barren sites and is often found on sunny dirt roads, in fallow fields, or in gravel or sand pits. The Boll’s Grasshopper prefers dry spots in open, sunny woods. With mottled coats varying in color from neutral gray to yellowish or reddish brown, both are well comouflaged when resting on the ground and are difficult to spot until they fly. If one is flushed, watch carefully where it lands, then approach slowly for a better view. These abundant species, along with most other band-wingeds, are very difficult to catch without persistent effort with an insect net. 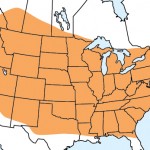 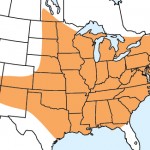 Song: Males of both species commonly crepitate, producing a crackling series of snaps or clicks as they take flight, or as they hover or fly in a butterfly-like fashion during courtship. These sounds, which are auditory signals used in courtship, have a broad frequency range and are apparently made as a male pops taut membranes on his wings as he flies (males are able to fly without crepitating). Both species also stridulate while perched, as do many other band-wingeds, but their songs are weak and not often heard.

In both the osteoporosis generic alternative to celebrex treatment and prevention trials Evista therapy..