Song of a Broad-winged Bush Katydid (scroll down for explanation and additional recordings!). 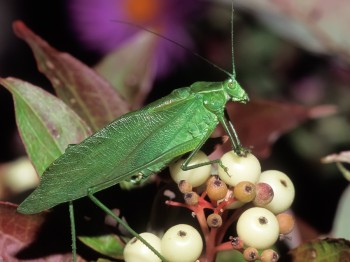 Elegant and regal are adjectives that might be applied to the Broad-winged Bush Katydid. It differs from other Scudderia in that the forewings are broad — the lower edge of each forewing curves down, making this katydid noticeably wider at the middle than other species in the genus. Common in upland meadows of goldenrod and asters, but also found in damp areas and among high-bush blueberries. They are masters of camouflage. Even when singing from a few feet away, a male can be nearly impossible to spot. You can sometimes capture one by flushing it and following it to its new perch. 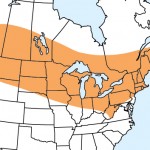 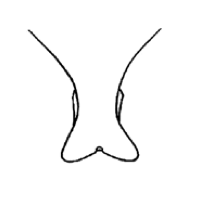 Song: A katydid that counts! The nocturnal song is a series of about five groups of lispy buzzing notes with a peak frequency of about 10 kHz. The male starts by giving a quick sequence of two or three buzzes. After remaining silent for a number of seconds, he next gives a rapid sequence of four or five buzzes. After another long pause, he gives a sequence of five or six buzzes, and so forth until he completes the entire series. In other words, each successive utterance in a song-series adds one or two buzzes, as if the insect were counting. The interval between these “counting sequences” is highly variable but is usually a number of minutes. There is also a gradual increase in volume from the beginning of a series to the end. Broad-winged Bush Katydids sing a different song during the day — a five-syllabled lispy rattle, given singly or in a series. 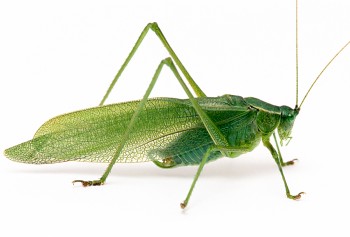