On the left is the unknown Amblycorypha that was collected from Adams County, Ohio. On the right is the wide-spread Common Virtuoso Katydid (Amblycorypha longinicta). Not to scale.

Friday evening, September 6, 2014, at 7PM Lisa Rainsong lectured to the 12 students regarding listening to the sounds of singing insects from the prespective of a musician. It was fascinating and Lisa’s perspective on listening to singing insects was spellbinding. Around 8:30 PM we all went outside to listen to the singing insects that were in the backyard of the Rieveschl Chalet at the end of Abner Hollow Road. After 20 minutes of listening, most of the group was driven to the fields around Chris Bedel’s house, about .3 miles out the driveway from the chalet. A small group walked out the driveway from the chalet to the fields. On their way they heard a “virtuoso”-like sound coming from the understory of the woods. Jim McCormac and David and Laura Hughes were in this group. Jim and David took some photos of what they suspected was the singing insect that they were hearing, though they didn’t actually see this individual sing. David showed me the images on the back of his camera. At that low resolution, it appeared to be a “round-winged” katydid, either Rattler or Clicker (Amblycorypha rotundifolia or Amblycorypha alexanderi).

On Sunday morning I had Jim show me the images on his computer that he had taken Friday evening of the mystery katydid. It was immediately obvious to me that this was a member of the ulheri group of Amblycoryphids. “OH MY! This isn’t longinicta, but it is in the uhleri group.” I said. We immediately planned to return that evening to the site of their encounter. The workshop was over at 1PM and we bided our time looking for Carolina Wolf Spiders and such in the environs of Adams County, Ohio.

We returned to the driveway of the chalet in the area where David and Jim remembered seeing the mystery singer. We waited and waited. Around 9:30 PM we heard the first songs from these katydids. It was again immediately obvious that this song was NOT from A. longinicta! I was able to get some fair recordings of these singers. After looking for 20-30 minutes we found a male and collected him. He was missing a hind leg. I heard another singing within a few feet of the driveway. He was easily found in a few seconds and was collected. He was intact. As soon as we returned to the Eulett Center, I photographed both males using the whitebox. I then set up to record one of the males songs by letting the recorder run overnight on the first collected male. He didn’t sing that night. Lisa kept the other, intact male, in her room overnight and reported that she was able to hear him singing at close range. I brought both of these males back home with me and setup again for an overnight recording session, this time with the intact male. He sang most of the night. (In attendance for this Sunday evening expedition were: Wil Hershberger, David and Laura Hughes, Jim McCormac, Wendy Partridge, and Lisa Rainsong.)

During the subsequent week, I contacted Dr. Thomas J. Walker, Professor emeritus of the University of Florida. After seeing the photos (including images of a female’s ovipositor that were taken by Chris Bedel) and looking at the sound files, Tom’s reaction was, “You might have something new here!” He also conveyed that Dr. Timothy Forrest, of the University of North Carolina, was working on the phylogeny of the Amblycoryphid group and that we should send him a couple of specimens for inclusion in the DNA extraction and sequencing project. I contacted Dr. Forrest, he was eager to receive specimens and suggested that we send them in 100% ethanol. Mark Zloba, of the Edge of Appalachia Center, prepared and sent two males to Dr. Forrest. They arrived intact on September 22, 2014. Dr. Forrest could not give an estimate as to when these and the other specimens would be processed and the phylogenetic data would be available.

Also, during these weeks, Mark Zloba was independently surveying for this new, unknown species, by doing “road-side” surveys listening for their songs. His hearing acuity is phenomenal. He was able to hear this species singing from significantly farther away than I was. He compiled a detailed map of the locations of his stops and the results of his song surveys. There was a clear “line” that separated the A. longinicta in the north from the A. sp to the south (other than the isolated population of A. longinicta that are in the fields around Chris’ house). This “line” has also been seen with the distribution of other plants and animals in the region. South of the line many species of more southern distributions are encountered. 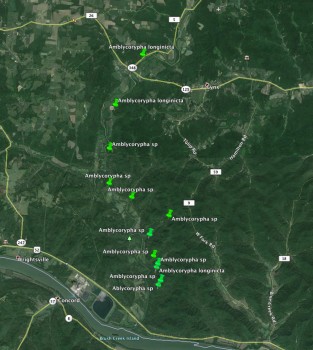 To the left is a map of the locations noted by Mark during his road-side song surveys. Other than the colony of Amblycorypha longinicta that is located in the open fields in the vicinity of Chris’ house, all of the “woodland” locations that Mark surveyed to the south of the Eulett Center supported only the unknown Amblycoryphid. It will be important to examine the extent of this line — how far to the east and west of Wagoneer Riffle Road does this abrupt change in species distribution continue.

Song: A simpler, more stereotypic song then that of A. longinicta. Most songs start with a lispy, slurred rattle, then progress to a few stronger, more sharply defined rattles, then finish with a “pen-spring” sound (Mark Zloba coined the “pen-spring” descriptor). Subsequent songs are often separated by a series of sharp ticks that resemble the ticking of a watch. Males may sing only one or a few songs at a time, or they may sing for many minutes on end, repeating the above pattern. The main variables in successive songs are the number of lispy, slurred rattles at the beginning of each song and the number of ticks between songs.

I returned to Adams County, Ohio on September 25, 2014 in order to secure better field recordings and additional specimens of females of the unknown species. The best of those recordings are included above.

Images of the collected males and females can be found here: Best of the Unknown Amblycoryphid from Adams County, Ohio. ©Wil Hershberger.

Mark Zloba was again extremely helpful during my second visit to the area and helped with the collection of females from the area around the Rieveschl Chalet.

During examination of the other species within the uhleri group, which was just described to specific epithets in 2004 by Dr. T.J. Walker, it appears that the songs of the males from this unknown Amblycoryphid in Adams County, Ohio are similar to those of Amblycorypha cajuni which is known to occur 440 miles south of this location (see maps at the bottom of this page). 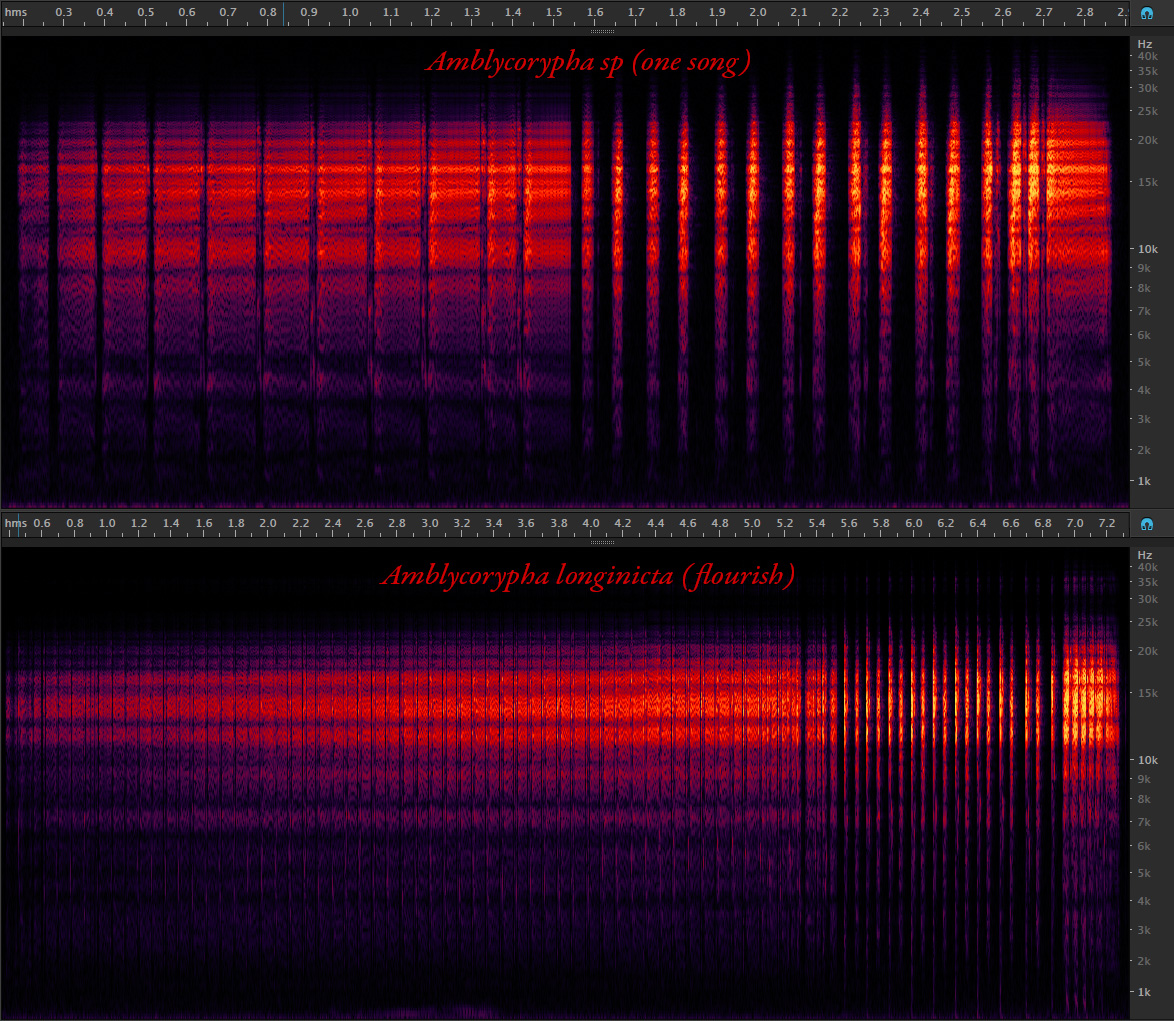 The image above is a comparison of the sound spectrograms of one song from the unknown Amblycoryphid vs A. longinicta’s flourish. The similarity of the shapes of the different syllables within each species songs is readily apparent. The introductory lispy, slurred rattles are very similar as are the brief, sharply defined rattles just before the ending “pen-spring” syllable. 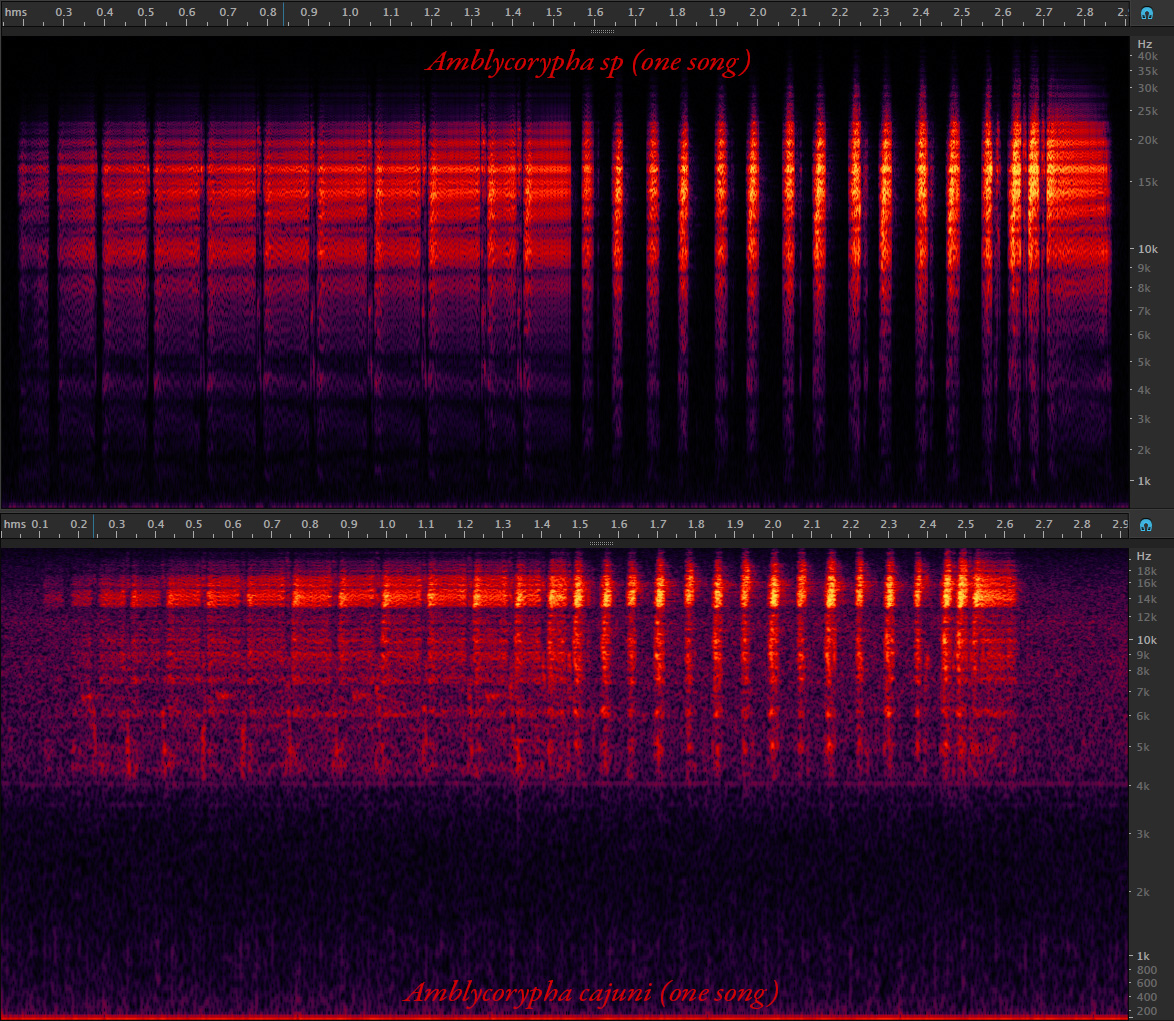 Finally, the above image compares the unknown Amblycoryphid with Amblycorypha cajuni (from Dr. T.J. Walker’s website). Here we can see the marked similarity between these two species songs. Though, many of the recordings of A. cajuni archived by Dr. Walker at the Macaulay Library of Natural Sounds do not include the ending “pen-spring” syllable. 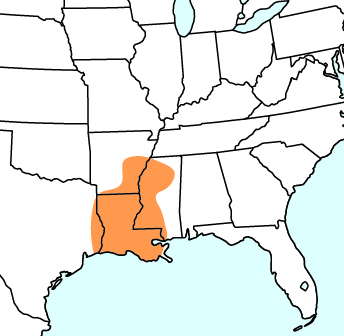 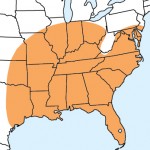 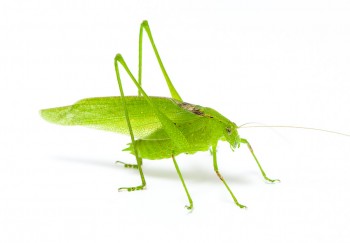