> How to record captive singing insects

How to record captive singing insects

One of the hardest aspects of the Songs of Insects project was making clear, clean recordings of singing insects in the wild. There always seemed to be other singers nearby or anthropogenic sounds in the background that were distracting and could potentially cloud the audio spectrograms we wanted to feature in the book. A few species could be recorded with a short shotgun mic on a boom. There were a few individuals that would tolerate the mic being very close to them while they sang in the field. However, the vast majority would have nothing to do with a large, black, foam-covered microphone being shoved in their faces. 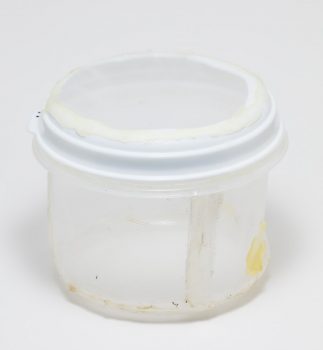 So, in order to secure clear and clean recordings of these singing insects, we brought many of them inside. My wife and I developed a “singing cage” made from a 3-cup (705ml) sized Rubbermaid container. I removed three panels from the sides, leaving three struts to hold the top of the container up (see the accompanying photos). I also removed most of the center of the lid. All of these holes were covered with white no-see-um netting using hot glue to secure it into place on the outside of the container. This created a vessel that would contain even the smallest singers and allow the sounds of their songs to escape mostly unimpeded for recording. Fortunately, these singing cages are top-shelf dishwasher safe.

Since most of these insects will sing both night and day, they were placed in a singing cage with some moistened iceberg lettuce then placed in a darkened, carpeted walk-in closet (a nearly anechoic chamber). A microphone was placed on a mic stand centered over the top of the singing cage. Depending on the species, the mic may have been nearly touching the top of the cage or placed several inches away so that the sound level of the singing insect did not overload the microphone’s element. It is amazing how loud some of these singers can be. In fact, some of the coneheads can produce sound levels of >100dB SPL at 1 meter. 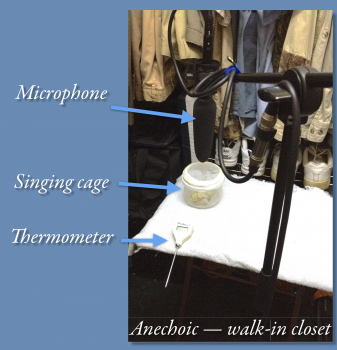 Some of the species require a day or more to adjust to being in the singing cage. They will, for the most part, start singing within a few hours of being left alone in the darkened closet. The only specimens that would not sing for us were parasitized and probably were not singing in the wild either. A few species required up to 48 hours to acclimate to their new surroundings, but they did eventually sing.

This technique produces very clean, clear, intimate sound portraits of these singing insects with no distractions in the background. Very clean audio spectrograms can be made from these recordings, such as those in our book and on this page.

Sonogram of the Southern Wood Cricket’s song. Note that there are 4 chirps per second.