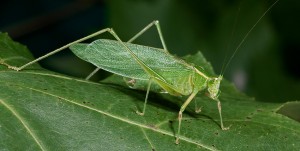 It's mid-July and the scuds are singing, and I don't mean scud missiles. I mean katydids of the genus Scudderia, named after Samuel Hubbard Scudder (1837-1911), an early American entomologist. In nearby Connecticut Hill Wildlife Management Area, I'm now hearing the songs of two species: the Broad-winged Bush Katydid (Scudderia pistillata) and the Northern Bush Katydid (Scudderia septentrionalis). It is the latter that excites me most right now … END_OF_DOCUMENT_TOKEN_TO_BE_REPLACED