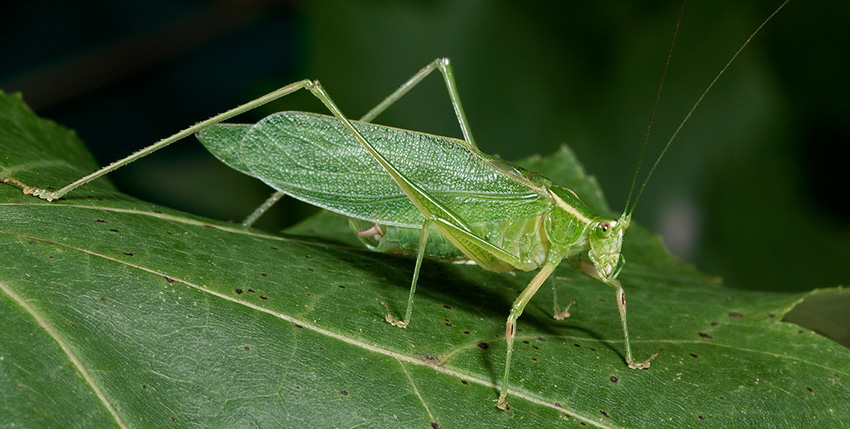 It’s mid-July and the scuds are singing, and I don’t mean scud missiles. I mean katydids of the genus Scudderia, named after Samuel Hubbard Scudder (1837-1911), an early American entomologist. In nearby Connecticut Hill Wildlife Management Area, I’m now hearing the songs of two species: the Broad-winged Bush Katydid (Scudderia pistillata) and the Northern Bush Katydid (Scudderia septentrionalis). It is the latter that excites me most right now because the window of time in which it sings is narrow and it’s always a pleasure to home-in on them when they are at their peak.

In my neck of the woods, the Northern Bush Katydid sings from thick shrubs at the edges of clearings. Males start singing at dusk and their rate of singing is highest shortly after dark. When there’s a lot of courtship and mating going on (which there is now at Conn Hill), you will be alerted to their presence by the excited, high-pitched clicks of the male, which are so high-pitched that many people are not able to hear them except up close (most of their energy is around 12,000 Hz!). As the clicks get more excited, the male will break into a series of buzzes lasting several seconds; they too may be difficult for some to hear.

Below is a closeup recording of a single male clicking and buzzing, recorded at very close range with a parabolic reflector microphone. Note how his minute-long performance gradually builds to a crescendo, ending with a series of loud clicks followed by silence (I believe the male flew to a different perch upon completion of his song series):

Interestingly, calling occurs in waves and appears to be contagious. After a period of quiet lasting a few minutes or longer, one male will begin clicking and others in its vicinity will join in. Soon you’ll hear buzzes erupting and the whole affair builds in intensity … then suddenly all the katydids fall silent. This kind of contagious group singing behavior is not uncommon in the singing insect world.