Song of a Dog-day Cicada (scroll down for explanation and additional recordings!).

Dog-day Cicadas are widespread and vocal. Their brown and green markings are almost identical to those of Linne’s Cicadas, but Dog-days are noticeably smaller in size. The common name comes from the fact that this species exhibits peak singing during the time of the year when the star Sirius, of the constellation Canis Major (the big dog), is prominent in the night sky. These typically hot and muggy days of July and August are referred to as the “dog days” of summer. The exact range of Tibicen canicularis is not well known, but it is the only cicada in northern areas that sounds like a buzz saw. Often found on or around pine trees. 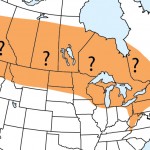 Song: A high-pitched whining drone that lasts about 15 seconds. Starts soft, gets louder, then tapers off at the end. Reminds many of the penetrating buzz of an electric saw. Peak frequency is about 7 kHz. 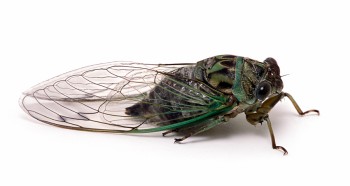