Song of a Handsome Trig (scroll down for explanation and additional recordings!). 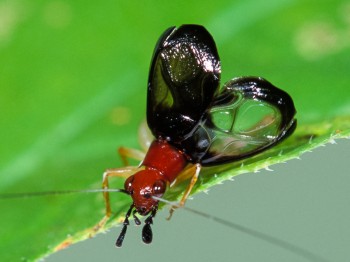 The Handsome Trig is certainly striking, with a black body, red head and thorax, and cream-colored legs with small patches of pure white accenting the bottom edge of the thorax and the legs. The Latin name for this species means “beautiful leaf-feeler.” A more appropriate name could not be found. The mouth parts, or palps, are in constant motion — the trigs use them to “taste” their environment. Their antennae are also in perpetual motion, and the effect of the palps and the antennae whipping around is mesmerizing. Found in brushy hedgerows, especially thickets of Japanese honeysuckle.

Song: A rattling broken trill, pitched at about 7 kHz. Extremely loud for such a tiny insect. A male often sings from a perch where two leaves are very close together, making a chamber for his concert, which acts like a small megaphone to project the sound away from a bush or tree. The male holds his wings nearly straight up as he sings. His left wing is clear in the center. In prime habitats where there are large numbers, the chorus of trigs can be overwhelming. 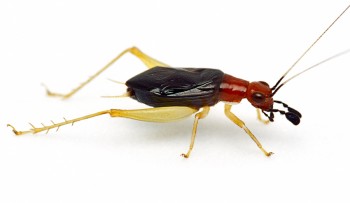