Song of a Northern Mole Cricket (scroll down for explanation and additional recordings!). 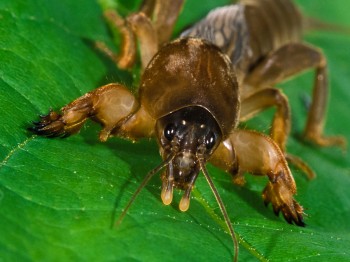 Northern Mole Crickets inhabit the damp margins of ponds and streams. They live in burrows in soft ground and are elegantly suited for a subterranean life style, with stubby front legs equipped with enlarged claws, specially suited for digging in soil and sand. Additional adaptations for life in tunnels include a streamlined body, short legs, and small wings. The diet of the Northern Mole Cricket consists primarily of small insects and other invertebrates, along with some organic debris and plant matter. Northern Mole Cricket males apparently call from closed burrows, probably to reduce their vulnerability to predators such as parasitic wasps. Nonetheless, their chirping is clearly audible above ground and it is easy to home in on the general location of a burrow. About half of all females are flightless and must travel on the surface or through the burrow system to reach the calling male. Burrows are equipped with an escape tunnel that allows the occupant to flee if pursued by a predator. Females lay their eggs in small chambers within the burrows. After sealing off her chamber, the female remains in the burrow
to defend the eggs. Capturing Northern Mole Crickets is a supreme challenge. With difficulty, they can be flushed from their burrows, or else collected in special pit traps designed to catch dispersing individuals. 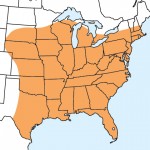 Song: The song of the Northern Mole Cricket consists of repeated chirps, given at a rate of about two per second. Each chirp is actually a brief trill composed of about 8 pulses. The frequency of the song is quite low for an insect, about 2 kHz, making it the lowest-pitched singer of all our native crickets.