I did a test of the frequency response of all of my microphones at 192kHz sampling rate – WOW, fascinating results.

The ME66 and the three ME62s are sensitive only to lower frequencies and all have a narrower frequency response than the MKH8020 which “hears” far more high-frequency content, at least to ~60kHz. The ME mics accentuated the ≤22kHz frequencies of the singing insect as that is what these microphones could sense even though most of the insect’s song energy was around 35kHz. This caused the recordings of high-pitched insects to sound lower-pitched than reality (compared to careful listening to the Conocephalus brevipennis with the unaided ear). The recording from the MKH8020 sounded the most realistic and natural.

The similar sensitivity of these microphones was among the reasons that I initiated this comparison. My interest in recording the high-frequency range of the songs of certain North American katydids prompted the interest in the MKH8020.

The ME62 is an omnidirectional condenser microphone with a no load, free-field sensitivity at 1kHz of 31mV/Pa and a frequency response of 20Hz-20kHz.

The MKH8020 is an omnidirectional radio frequency condenser microphone with a no load, free-field sensitivity at 1kHz of 31mV/Pa and a frequency response of 10Hz-70kHz.

Also noted was that the recorders are not set up to handle the signal from the MKH8020 properly. To accurately meter the input signal from something with high-frequency content (>20kHz), the recorder has to be set to 192kHz sampling rate. In testing with a high-frequency source like the C. brevipennis, setting the Zoom F8n to 48kHz sampling rate, I couldn’t increase the gain past 32dB without getting audible clipping in the headphones, even though the meters were barely reading -20dBFS. Leaving the gain set at 30dB and changing to 192kHz sampling rate, the meters showed a peak of -6dBFS. So, the metering circuit is “hearing” all of, or most of the high-frequency content from the MKH8020 even when the sampling rate is set to 48kHz. This is a problem for accurate metering!

I tested the Sound Devices 702 and found that when using the MKH8020 I could increase the gain to ~32dBFS at 48kHz sampling rate before hearing distortion. At 192kHz sampling rate, I had to lower the gain to ~30dBFS to avoid clipping and distortion. So, the 702 also suffers from this deficiency of not filtering out the higher frequency content of a sound source when recording at a lower sampling rate therein making the meters inaccurate – underestimating the level of the sound source, even though those frequencies are not being recorded.

As far as I know, the MKH8020 is the only “commercial” mic with a frequency response up to 60kHz (10Hz – 60kHz as specified by the manufacturer). When using this mic with at least the Zoom F8n, or the SD 702, problems of accurate metering could occur with sound sources that have a high-frequency component (i.e., clanging metal, jingling keys, singing insects, jungle environments, aquatic species, etc.)

Of all the katydids that I have in captivity at the moment, the C. brevipennis has the highest frequency content to its song – that is why I have used this species in this study.

The frequency scans of the recordings from the MKH8020 and the best/newest of the ME62 capsules show a very different frequency profile for the C. brevipennis. 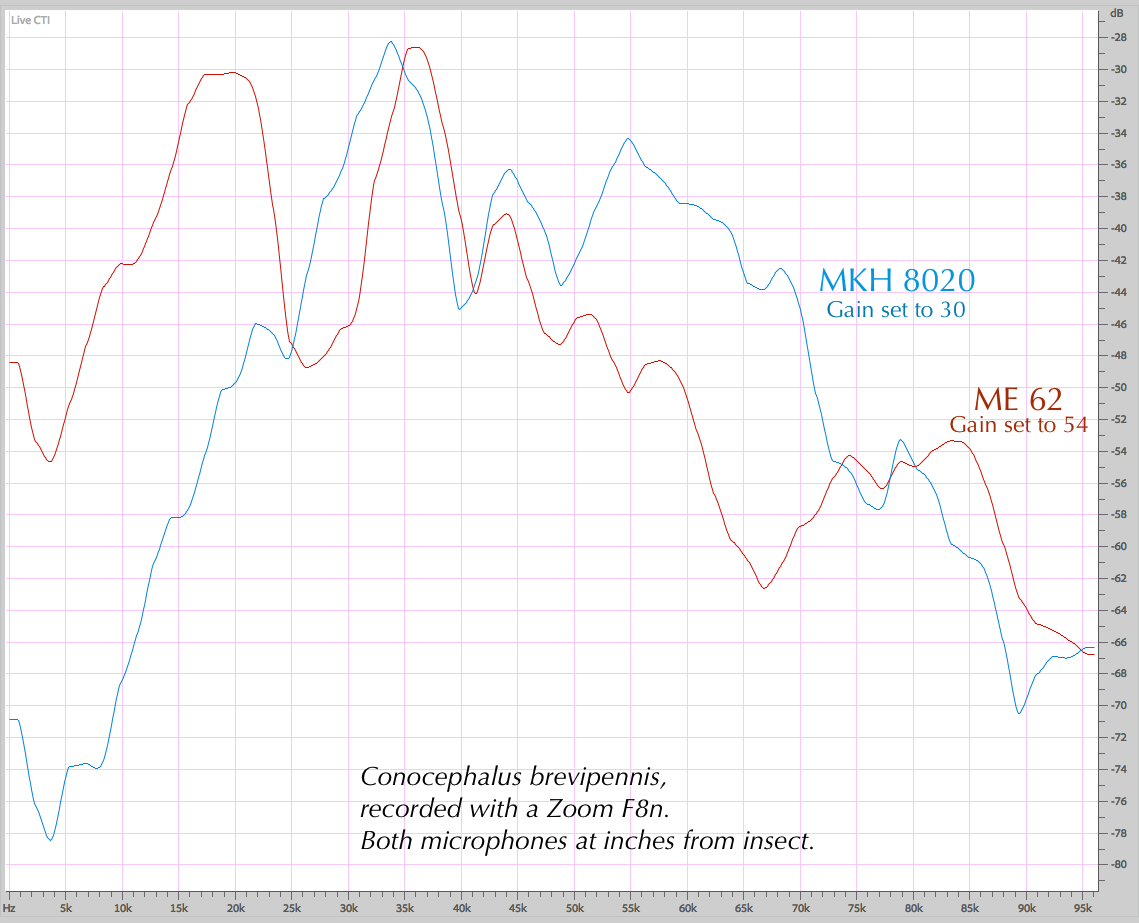 Frequency scans of songs of Conocephalus brevipennis comparing the ME 62 and the MKH 8020. Both examples were normalized to -3dB.

Since the gain for the ME62 was set 24dB higher than the gain for the MKH8020, the low-frequency content (below where the insect was singing with most energy) is different by ~22dB. It appears that, even though the ME62 recorded content at 32kHz, it is not hearing all of the energy at these higher frequencies and therefore over-emphasizes the lower frequencies by ~24dB. The peak in the ME62s scans at 17kHz does not appear in the MKH8020 scan and does not seem to reflect the reality of the song as heard with the unaided ear.

All channels into the Zoom F8n had a high pass filter engaged at 80Hz, -12dB/octave.

So, the take-home message is that when recording a source with high-frequency content with the MKH8020, be sure to use 192kHz sampling rate for accurate metering and to avoid clipping/distortion.

Also, this means that a number of recordings of high-pitched singers archived at Cornell’s Macaulay Library are not true reflections of the reality of the organism’s sounds (in particular katydids). All of the katydid recordings, for example, may reflect a biased low-frequency profile due to the limitations of the microphones used, and therefore are not reflections of the true nature of the singers “voice.” This emphasizes the absolute requirement that the make and model number of the microphone, the make and model number of the recorder, the sampling rate and bit-depth of the recording be listed with every recording archived.

Comparison of the ME 62 and the MKH 8020 audio spectrograms of Conocephalus brevipennis song. Samples are the same song from the same individual at the same instant in time. Mic capsules were nearly touching. Both song examples normalized to -3dB. Play the audio recording below to hear the difference between the ME62 and the MKH8020. The second example, from the MKH8020, is high-pitched and may be hard to hear. However, the latter sounds more life-like.


Information on audio recorder choice.
For this testing, I tried a Sound Devices 702 and MixPre-6. The SD702 would occasionally produce clicks or pops when recording at 192khz sampling rate. (Later I found that turning the SD702 on, changing the sampling rate, turning the recorder off, then turning the recording back on, then recording would eliminate the production of clicks/pops at this high sampling rate.) (Updated 2019: With the release of firmware v3.03, the MixPre-6 is currently wonderfully useful at the 192kHz sampling rate (the current firmware version is 5.01 and is fully functional and usable at these high sampling rates). It no longer produces clicks/pops every time the insect sings and there is no longer the additional high-frequency noise production problem.) The new Zoom F8n has been recording at 192kHz sampling rate without a single glitch for well over 100 hours. Therefore, in order to give the microphones the benefit of clean sampling and recording, I chose to use the Zoom F8n for these experiments.

In subsequent testing, the MixPre-6 and the SD 702 (with the workaround noted above) are recording at 192kHz sampling rate perfectly. The ability to link two channels as a stereo pair and then having one channel’s gain control knob adjust the gain of both channels and the other channel’s gain control to adjust the offset of the two channels is the ideal working environment for field recording. The Zoom F8n cannot be set up this way, unfortunately.